A really long time ago, my parents and I used to go to this South Indian restaurant called Pavani.  It’s since shut down, but I fell in love with a dish called “Ginger Chicken”.  It’s an appetizer that goes well with an ice cold beer.  It was SO good, and I thought I’d never have it again.  Then a place called Biryani Pot opened up in Houston and they had a dish called Chicken 65 that was the same exact thing.  This is a popular South Indian dish that I’m sure you’ll love!

The name is unique and I tracked down the real story behind it.  There was a military canteen in the South of India that served this dish.  The whole menu was in Tamil so the military men who didn’t know the language would order by the number on the menu.  This particular dish was #65, and so it became Chicken 65.

My version of it tastes exactly like the one at the restaurant.  You can imagine my excitement when I took the first bite of this.  It’s such an easy recipe too!

Here’s what you need:

Salt and pepper to taste

2 tbsp garlic ginger paste (equal amounts of each, blended to a paste)

So first you want to prepare the chicken.  I use thigh meat because it’s always juicier and more flavorful.  Beat the egg and pour it over the chicken.  Sprinkle it with the corn starch and salt and pepper.  Mix it until it’s all coated.

Fry the chicken.  I chose to shallow fry it, but you can deep fry it as well.  Whatever your preference.  Once all the chicken is fully cooked, set it aside. 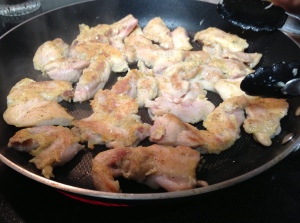 Now you want to make the sauce.  Heat up a couple of tablespoons of vegetable oil and add in the onion.  Stir in the chopped garlic, green chilies, and curry leaves.  Mix around until the onions have softened and browned.

Add in the turmeric, red chili powder, and cumin coriander.  Mix well.  Then add in the chili garlic sauce and the garlic ginger paste.  Mix around.  At this point you could add in the red food coloring.  I choose not to.

Now the sauce is done so add back the chicken and mix until it’s coated well.  If your sauce is too liquidy just cook it down until it’s dry.  Unless you prefer it like that.

You could top with some cilantro.  I would keep some yogurt nearby, it’s a hot dish!  But SO SO good.

Let me know how yours turns out!