I want to tell you a story that is near and dear to my heart.  In it you might find a lesson, or perhaps some inspiration, or maybe you’ll just find it to be an interesting story to read. 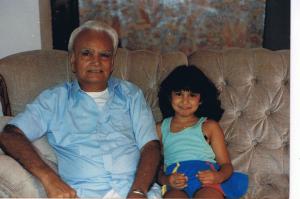 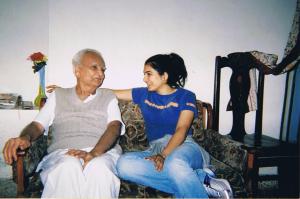 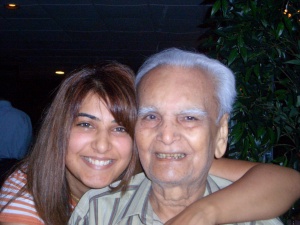 It was May when he passed, and we took this trip in December.  That September I met Jayesh and fell in love instantly.  By October we were happily engaged and planning a wedding.  So when December came along and I was getting ready to take this flight I had mixed feelings.  I had not gone a day without talking to Jayesh and this trip to the other side of the world was going to throw a wrench at that.  On the other hand, I was really excited to see my family and a bit apprehensive about scattering the ashes.  I knew it was going to be extremely difficult to let go even though I knew it was necessary.

The day of the flight to India, my dad managed to upgrade my ticket to first class.  I was flying alone and meeting my parents there.  My heart was heavy and taking that flight alone was difficult.  I had so many emotions just floating at the surface waiting to bubble over.  And it happened.  They served a really good shrimp appetizer and I thought, ‘Jayesh should really be here’.  I didn’t think twice I grabbed the phone from the seat and slid my credit card through and dialed Jayesh’s number.  I started crying explaining to him that I felt guilty being in first class for the first time in my life and not next to him.  I wanted to experience new things with him.  I told him about the champagne upon seating, the scented warm towels, the comfortable seats, the food, and how none of it was as good without him.  He reassured me that we would talk often and that we would see each other soon.

The first part of the trip involved scattering my grandfather’s ashes.  We didn’t hire a priest, just a simple thing with my uncle, aunts, mom, dad, and cousin.  We said a few things and then took handfuls of the ashes and threw them into the Holy River.  I dipped my hands into the cool water and watched the ash that was clinging to my hands float away.  I cried.  Like a child.  The feeling of loss was so overwhelming.  Even though it had been 7 months, it felt fresh.  I kept the ID tag they put on the ashes and gripped it tight in my hands.  I couldn’t let go.

I hadn’t been feeling well and I took a turn for the worse that day.  Perhaps my sad heart, drained of any positivity, was making it difficult to recover.  To add to this discomfort, we were scheduled to take a train ride to Agra, then Jaipur.  The train ended up being delayed for 14 hours.  That’s 14 LONG hours at a train station with a dirty bathroom.  My temperature was spiking and after the first few hours I started going crazy.  There was nothing to do and I was tired and hungry.  I decided to call Jayesh since the timing was right.  Of course it goes to voicemail.  So I sit and talk to my cousin, poor guy, I must have talked his head off.  We finally get on the train and take the long journey to Jaipur since the delay forced us to cancel Agra.  It was a day long journey in the train, we mostly slept and ran to the bathroom (my cousin and I were both sick!)  I was a bit disappointed we wouldn’t make it to Agra.  That’s where the Taj Mahal is and that’s the second time my trip was canceled.  There’s a saying in India, that you don’t go to see the Taj Mahal, the Taj Mahal invites you.  So only those fated to go, get to go.  I guess it wasn’t in my fate.  My mother says to me “Maybe you’re supposed to go with your husband.  Don’t worry, you’ll get to go soon.”  I call Jayesh 5 more times and each time it goes to voicemail.  I start to worry.

So now that the timing is all thrown off we get to Jaipur a bit early and so our car rental isn’t quite ready.  We spend another hour just lounging around.  A van takes us to the resort, and by this time I am so exhausted I can’t take it.  We walk around the resort, which is beautiful beyond words, but I can’t quite enjoy it because I just want to lay down and rest.  As we approach the lobby I imagine just collapsing into the bed and sleeping for the whole day.  I sit on a sofa and wait for my dad to get the check in sorted.  My mom leans over and says “Who is that movie star over there, he looks familiar.”  I look up to see some fat man standing there.  “Mom, it’s just some fat guy, I don’t know who that-” and then the fat man moved and behind his giant silhouette I see the most beautiful man I’ve ever laid eyes on.  Jayesh!  My brain short circuits and I just run to him and throw my arms around his neck.  I’m crying and delirious.  I couldn’t wrap my brain around him being there.  What was he doing there?  How did he get there?  How did he know we were here?  What is going on?  My head was spinning with questions.  I hear everyone around me cheering and clapping and I suddenly realize I’m in the middle of my family in the resort lobby….in INDIA.  I settle down and stand next to Jayesh in a state of shock.

Later, Jayesh explains to me that the trip had been planned by my father, him and my father in law.  To surprise me and turn the trip into something positive.  Everyone was thinking of me.  I felt so special in that moment and so important and loved.  I can’t describe it, it was overwhelming.  The following morning we took a car to Agra and saw the Taj Mahal.  Jayesh asked me to marry him once more, his final proposal, at the biggest symbol of love in the world.  It was romantic and the perfect start to our fairy tale.  For several days it just seemed like I was dreaming.  That moment, where I reacted based on impulse, being totally caught off guard, proved to me I was in real love.  He’s my soul mate, it’s why I felt so empty without him and why my heart overflowed when I saw him in Jaipur.  I will never forget that.

What I realized at the end of this trip was this; relationships are everlasting.  My grandfather took care of me, protected me, guided me, loved me, and was always there for me no matter what.  When he passed I thought I had lost all of that and it felt like a giant void just sucking my happiness out of me.  Then Jayesh came along and I learned that the relationship I had with my grandfather never ended, it just took a new form.  Jayesh loves me, protects me, guides me, and is there for me no matter what.  The only difference is that my grandfather was like a father figure and Jayesh is my partner.  Much like the Hindu belief of reincarnation, I believe that our relationships are reincarnated as well.  They only seem to end, but they continue on in a different form.  So instead of continuing to mourn, I celebrated the renewal of one of the most important relationships in my life.  I was meant to meet Jayesh when I did, he saved my life.  He breathed new air into me and I was transformed.  I’m not sure if he knows just what he’s done for me and how much I value him, our relationship, and everything we’ve built together.  The day we met was a turning point in my life.  I could spend the rest of my life thanking him, it wouldn’t be enough.

So I hope what you’ve taken from this story is a lesson in value, faith, and purpose.  Value because each relationship in our life has value and meaning.  There is a reason for it, a purpose.  Identify the purpose and you will find the value.  Faith, because you must have faith in yourself and others.  Faith allows us to put aside insecurity and distraction and really focus on what’s important.

I wish you love, happiness, and valuable relationships.